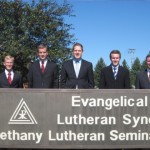 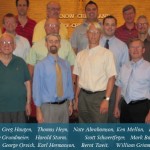 The annual summer institute of Bethany Lutheran Theological Seminary has been held in various locations throughout the country in order to make it possible for more of our pastors to attend. This year the institute took place at Holy Cross Lutheran Church & School in Madison, Wisconsin, July 25, 2011.

The first portion of the institute was a presentation entitled “Age of Lutheran Orthodoxy.” This presentation included a general outline of this period, which included the distressing days of the Thirty Years’ War when much of central Europe was ravaged and depopulated. Then there was a study of the Lutheran devotional writers of the period, their devotional literature (Erbauungsliteratur), and Lutheran spirituality. Finally, the presentation included a study of the major seventeenth century dogmaticians and their writings.

The other segment of the institute was a presentation on “Major Themes in Preaching.” Here examples were given of presenting the Gospel using the major redemption themes, including the Christus victor, victim, and vicar themes. These presentations were delivered by Prof. Gaylin Schmeling.

On May 12, 2011, after a day of presentations from last year’s vicars and other synodical officials, the Bethany Lutheran Theological Seminary community gathered at Bethany Lutheran College’s Trinity Chapel for the annual Call Service to find out where the new Candidates of Theology, vicars, and teachers were assigned. The Rev. Gaylin Schmeling, seminary president, presided over the divine service and the Rev. Thomas Heyn preached the sermon.

ethany Lutheran Theological Seminary’s annual Call Day and Graduation service will close off the school year. Call Day will occur Thursday, May 12, 2011 at 3:15pm. Graduation will occur Sunday, June 19, 2011 at 7:00pm. Please join us for these important days in the lives of the young men, and in the life of the Church.

On Sunday, February 27 from 5:30 – 7:00 p.m., Bethany Lutheran Theological held its annual spring Seminary Recruitment night. This year Prof. Michael Smith was the presenter, lecturing on the theme: “Be a Pastor – See the World!” He focused on opportunities for mission/outreach that the Lutheran pastor has each and every day. The evening was one of many opportunities which BLTS offers to encourage young men to consider the work of the Pastoral ministry.